Genesis and the Big Bang: The Discovery Of Harmony Between Modern Science And The Bible 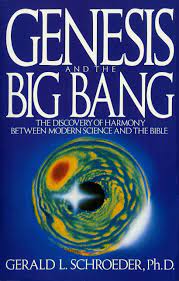 In this groundbreaking book, physicist Gerald Schroeder takes on skeptics from both sides of the cosmological / theological debate, arguing that science and the Bible are not at odds concerning the origin of the universe and of life. They are two views of one reality from two vastly different perspectives.

The culmination of a physicist’s thirty-five-year journey from MIT to Jerusalem, Genesis and the Big Bang presents a compelling argument that the events of the billions of years that cosmologists say followed the Big Bang and those of the first six days described in Genesis are, in fact, one in the same – identical realities described in vastly different terms. In engaging, accessible language, Dr. Schroeder reconciles the observable facts of science with the very essence of Western Religion: the biblical account of Creation.

Carefully reviewing and interpreting accepted scientific principles, analogous passages of Scripture, and biblical scholarship, Dr. Schroeder arrives at a conclusion so lucid that one wonders why it has taken this long in coming. The result for the reader – whether believer or skeptic, Jewish or Christian – is a totally fresh understanding of the key events in the life of the universe.

Here artifacts and fossils of that prehistoric animal, Neanderthal man, have been found. For the theologian steeped in a superficial reading of Genesis, these fossils may be Neanderthal, but they have nothing to do with man! For the paleontologist, the age of the fossils also presents a problem, but of a different sort. The bones of Neanderthal man are too old to date using carbon-14 methods. So much of the original skeletal carbon-14 has decayed (one-half the original con- tent decays radioactively each 5.600 years) that the small amount of carbon-14 remaining cannot be reliably measured. The bones’ location within geologically known strata gives them an estimated age of 60,000 years!

For Josh and for many other people, Jew and Christian alike, a 60,000-year archaeological history is at least 54,000 years in error. It is totally at odds with a literal understanding of the opening chapters of the book of Genesis. But this discord between archaeology and theology is neither necessary nor valid. As I have studied the details of biblical and scientific texts, I have reached what was for me an enlightening and unexpected conclusion: The biblical narrative and the scientific account of our genesis are two mutually compatible descriptions of the same, single, and identical reality. My goal in this book is to explain that compatibility to expert and layperson alike.

Simply stated, I will discuss here the first week of Genesis. To the literalist, these first six days can be a problem. Fossils place the appearance of beings with humanlike features at well over the 60,000-year age of the Neanderthal fossils of the Carmel caves. Although dating the time of Peking man’s existence has the same types of problems as those encountered when dating the remains of Neanderthal man, the archaeological estimate is that these humanlike animals lived some 300,000 years ago. Their home, near Cho-k’ou-tien, China, was in a group of limestone caves quite similar to those found in the Carmel range. Homo erectus, the genus and species to which Peking man belonged, made its appearance 1.5 to 2 million years ago. Because of this antiquity, only a few nearly complete Homo erectus skeletons have been found. One of these, located in what is now an arid region of Kenya, is the Lake Turkana Boy. It is estimated that the lad lived his twelve years of life 1.6 million years ago. Looking at this fossil, it is clear that, except for the shortened forehead, these early hominids had features so similar to modern humans that they could go unnoticed if they walked on a busy city street.

Read this book. Read it with an open mind, or read it with skepticism, but read it. Above all, read it for thought, education, inspiration, and pleasure. You will be well rewarded. . . . I remain unconvinced (by the book) – but that is not the point…(Schroeder’s) tour of human knowledge, history, and culture is grand indeed, filled with scientific research at the forefront of knowledge, keen argument, and rich deposits of Jewish learning and wisdom.This book will not be the last of its type: these two great life currents – modern science and traditional religion – have yet to meet in the informed and skeptical mind. Schroeder’s courageous work may mark a step toward that meeting.

A very distinguished scientist, Gerald Schroeder, has written a fascinating book that finds no conflict between the Bible account of Genesis and science.

In his groundbreaking book, Genesis and the Big Bang, physicist Gerald L. Schroeder presents a compelling argument that the events of the billions of years which according to cosmology followed the big bang and those events of the first six days described in Genesis are in fact one and the same. Engaging, accessible language clearly exposes the unity that binds biblical Genesis and cosmological theory.